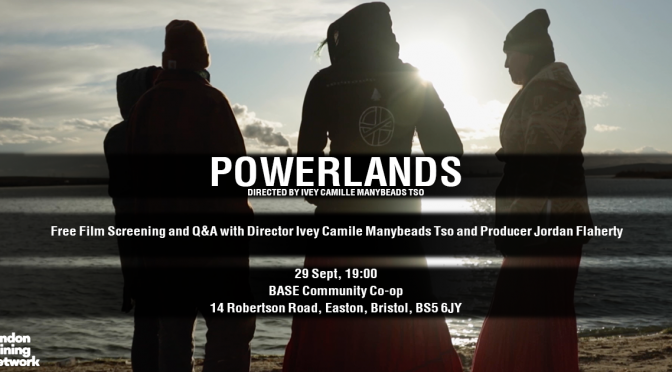 This event is free, but please sign up on Eventbrite at https://www.eventbrite.co.uk/e/powerlands-screening-at-base-community-co-op-tickets-400785910447 so we can keep track of numbers.

This is a really strong film and a chance to meet (and possibly pose a question to) its director and producer: ‘London Mining Network is excited to bring director Ivey Camille Manybeads Tso & producer Jordan Flaherty to the UK for a screening tour of the film Powerlands. The film touches on many of London Mining Network’s key messages and features communities we have been working with for many years around the Cerrejon mine in Colombia.Starting 21 September, Ivey Camille and Jordan will be presenting the film and answering questions at a number of venues across the country. See https://londonminingnetwork.org/powerlands-uk-screening…/ for the full list of dates and locations.—-A young Navajo filmmaker investigates displacement of Indigenous people and devastation of the environment caused by the same chemical companies that have exploited the land where she was born. On this personal and political journey she learns from Indigenous activists across three continents. This film is in seven languages, including several Indigenous languages rarely captured on film: English, Diné, Spanish, Wayuu, Visayan, Blaan, and Zapotec. More here: www.powerlands.org

Powerlands is a documentary feature about global, interconnected indigenous resistance to resource colonialism.
Ivey Camille Manybeads Tso, a young Navajo filmmaker, investigates the displacement of Indigenous people and the devastation of the environment caused by the same chemical companies that have exploited the land where she was born. She travels to the La Guajira region in rural Colombia, the Tampakan region of the Philippines, the Tehuantepec Isthmus of Mexico, and the protests at Standing Rock. In each case, she meets Indigenous women leading the struggle against the same corporations that are causing displacement and environmental catastrophe in her own home. Inspired by these women, Ivey Camille brings home the lessons from these struggles to the Navajo Nation.
Watch the trailer at https://www.youtube.com/watch?v=cybdnhdp43g

Plus Circle None and local bands Gimic and Spanner!

Benefit for BASE Social Centre

Tickets £7 from Headfirst, but NTAFLOF